More good news today, as Junafilm is announced as one of 13 production companies from northern Germany to receive the „3×3“ funding from Film Fund Hamburg Schleswig-Holstein! This will allow us to develop three scripts over the next three years. We couldn’t be more excited! The first project will be „Das Licht“, a mystery film written by Hauke Johannsen.For more infos on the funding scheme click here.

Our feature film „World Beyond Within“ by Eibe Maleen Krebs has just been announced as the winner of the „Best Narrative Feature“ Prize of the monthly edition of Buenos Aires Film Festival. As winner, the film is also automatically nominated for their „Best Annual Feature of the Year“ Award. We’ll keep our fingers crossed!

Editor Heike Gnide has been nominated for „Best Editing“ at the German Film Price 2020 for her work on the Junafilm feature Pelican Blood (2019).The ceremony will take place on 24th April 2020 in Berlin. All nominations can seen here. 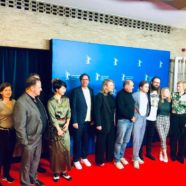 Junafilm to pair up with Elevation & Protagonist for new feature project

As announced in Screen International during Berlinale on Sunday, 23rd February, Junafilm film will pair up with Canadian based producer & distributor Elevation Pictures and UK based sales company Protagonist for Carly Borgstroms upcoming debut feature. Carly already worked on several Junafilm projects and we are beyond exicted to shoot her debut film this autumn in Ontario! The untitled project is a psychological thriller about a pack of teenage girls in a secluded village who decide to fight the monster lurking in the woods by embracing their own dark power. You can read the full announcement here on Screen...

As part of the Berlinale 2020 SLEEP (SCHLAF) by Michael Venus was nominated for the GWFF First Feature Award. You can read all about it on the Berlinale website .

Any cookies that may not be particularly necessary for the website to function and is used specifically to collect user personal data via analytics, ads, other embedded contents are termed as non-necessary cookies. It is mandatory to procure user consent prior to running these cookies on your website.